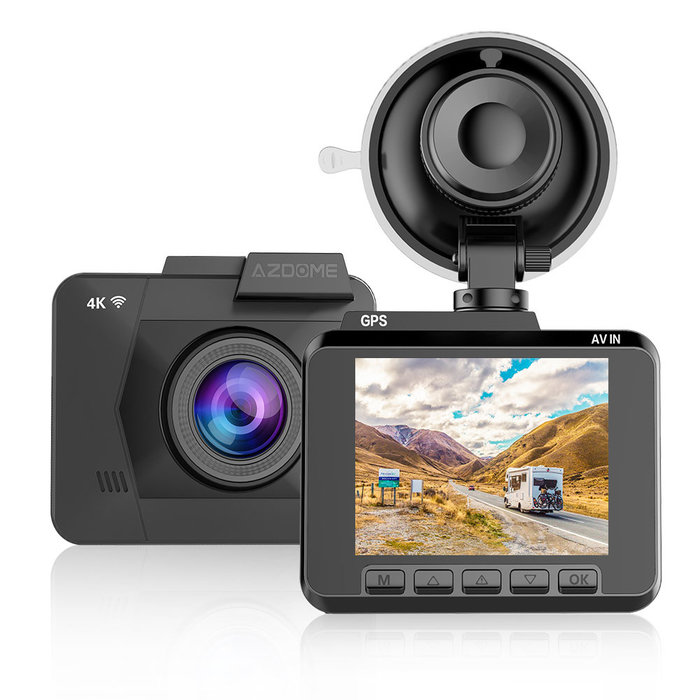 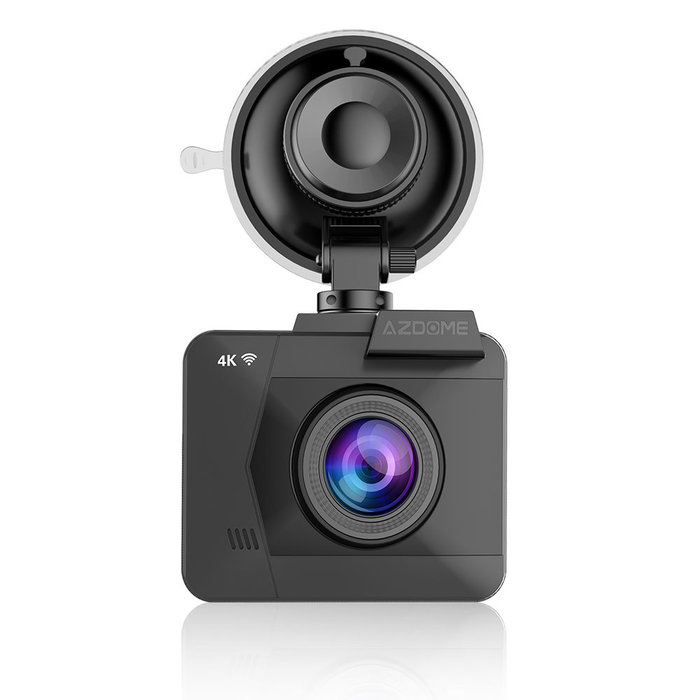 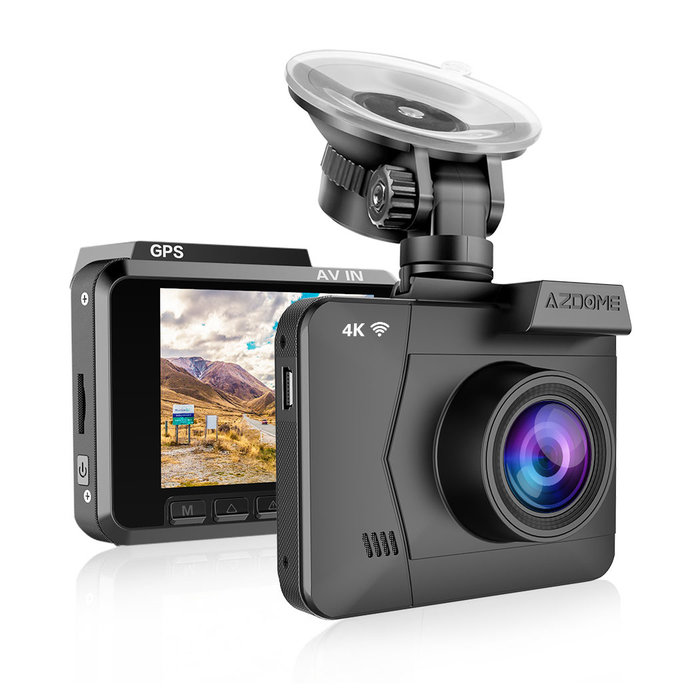 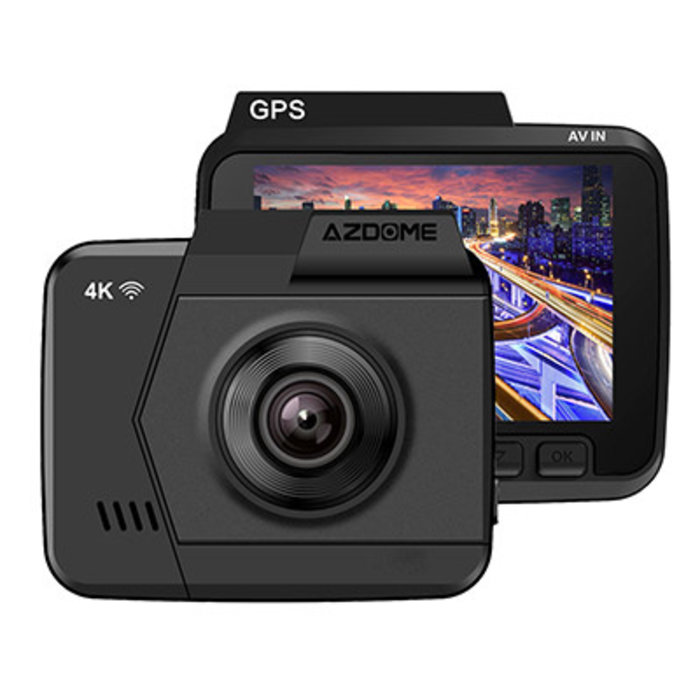 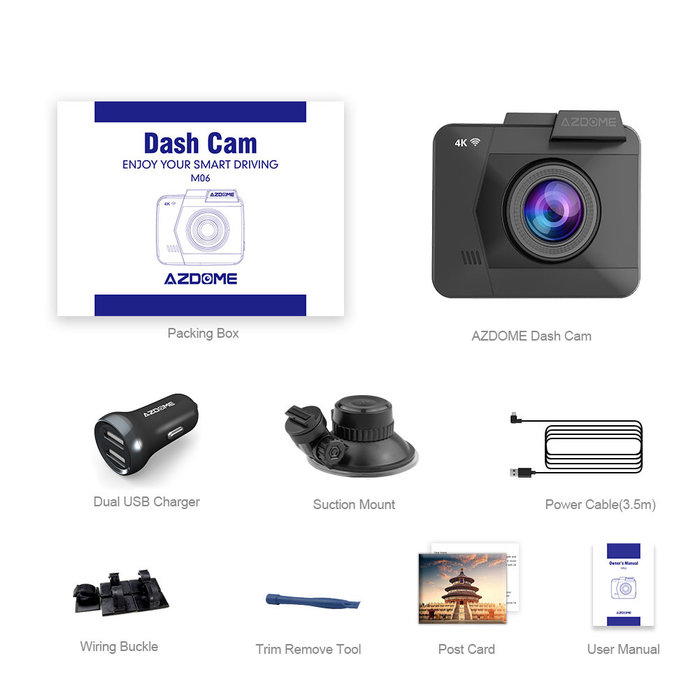 The AZDome M06 is a new and stylish 4K (2880p) dashcam and is the successor to AZDome's highly successful GS63H. It has the same useful features such as Wifi and GPS and the image quality is improved by using the high quality Sony IMX323 sensor. The handy suction cup attachment makes it easy to use in multiple vehicles.

Notice:
- Sometimes 64gb and 128gb SD cards in the camera are not immediately recognized. In that case, they must first be formatted, this can easily be done in the menu of the camera.
- Some users report that the time jumps several hours every time, in that case the Time Zone is not set correctly. This can be adjusted in the system menu and should be set to +2 in summer and +1 in winter.

The AZDome M06 is equipped with the high-quality Sony IMX323 image sensor that makes very clear recordings, even in the dark. With this, the AZDome M06 4K films at 2880p in 24fps. The resolution can also be set lower, such as at FullHD 60fps or 30fps.

Because the AZDome M06 is equipped with wifi, all images can be easily viewed via smartphone. The Wifi has a range of about 10 meters. The AZDome App is available for iOS (Apple) and Android phones and tablets. Via the app, the images can be viewed and downloaded so that the SD card no longer needs to be removed from the camera.

With the option to connect a VGA rear camera, the AZDome M06 can be expanded to 2CH dashcam. The camera then films both front and rear of the car and can therefore easily be used as a rear camera. The images of the front and rear camera are both stored on the SD card and there is no separate power supply required for the rear camera. It is simply connected to the front camera and receives power via this cable.

The rear camera can optionally be connected to the power supply of the reverse lights. If the car is then put into reverse, the image of the rear camera will be displayed in large on the LCD screen. In this way, the dashcam can easily be used as a parking aid.

The AZDome M06 comes with a handy suction cup and a sturdy sticker attachment. By attaching it with the suction cup, it can easily be removed from the car with the holder. The sticker attachment is a slightly sturdier holder, and it remains permanently attached to the windshield. The M06 can be easily slid in and out of both holders so that the dashcam can always be removed from the car.

The AZDome M06 supports MicroSD cards up to 128gb, which can be used for up to 36 hours of filming.

The HDR (High Dynamic Range) technology enables the camera to generate sharp images at very high and very low light intensities. This allows the camera to capture crisp images both during the day in high light and at night in low light.

The large 2.4 inch LCD screen on the M06 makes setting up the functions incredibly easy. The screen of course also shows exactly what is being filmed, so you can adjust the dashcam.

This M06 has a wide-angle lens of 150 degrees. This ensures that a very large area is observed, not only in front of the car but also in the surrounding area.

The M06 is equipped with loop recording. This means that the camera continues to film when the SD card is full. The oldest clips on the SD card are then deleted and automatically overwritten for new images. The length of the clips can be set to 3, 5 or 10 minutes.

The loop recording can also be switched off, in which case the camera takes one long shot. Please note that in this case the camera stops filming when the SD card is full.

The AZDome M06 has a built-in GPS module. This GPS module enables the speed to be displayed on the screen and also keeps track of the coordinates of the places where the footage was shot. This makes it possible to use the supplied software later to see exactly where certain recordings were made.

The AZDome M06 starts filming automatically when the car is started. So you don't have to worry about it anymore when it's hanging in the car. The condition is that it is connected to the power supply in the car.

The built-in G-sensor detects the dashcam when you have an accident. On impact, images are automatically stored securely so they are not lost. They can not be overwritten or deleted via the dashcam.

The M06 has a convenient parking mode function to secure the car when parked. In parking mode, the camera automatically starts filming when a movement or vibration is detected. In this case, it saves 10 seconds before and 20 seconds after that event.
Please note that use in parking mode requires a continuous power supply MiniUSB to provide power to the camera when the ignition is turned off. This continuous power supply also ensures that the car battery does not run out due to the built-in protection.

The AZDome has the ability to not only film but also to take pictures in 16 megapixels. Useful for example after an accident to record the damage.