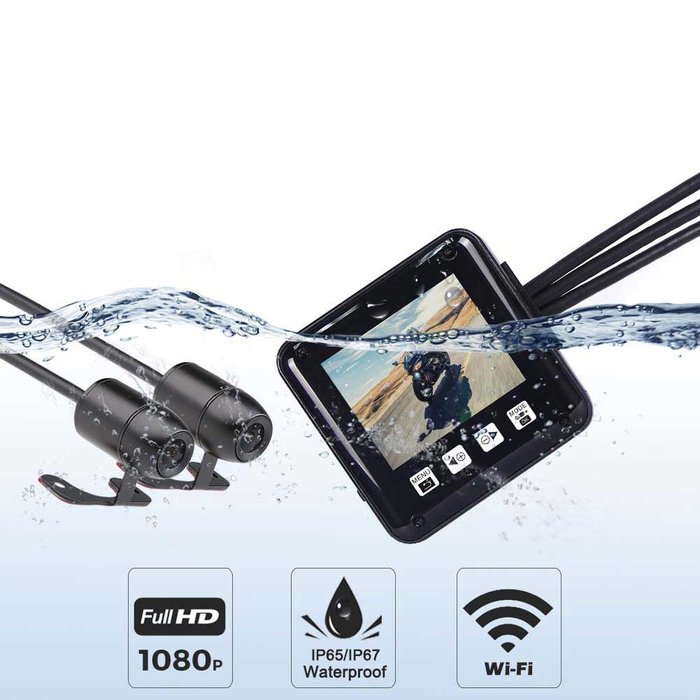 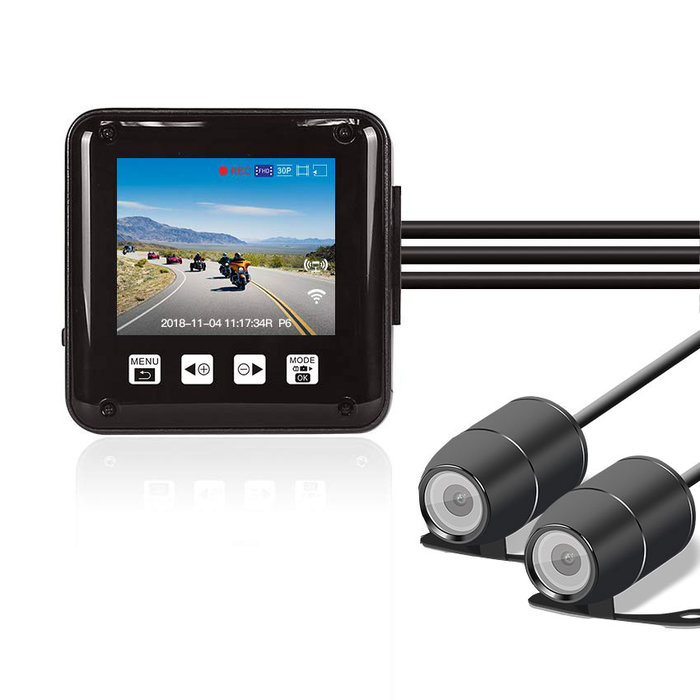 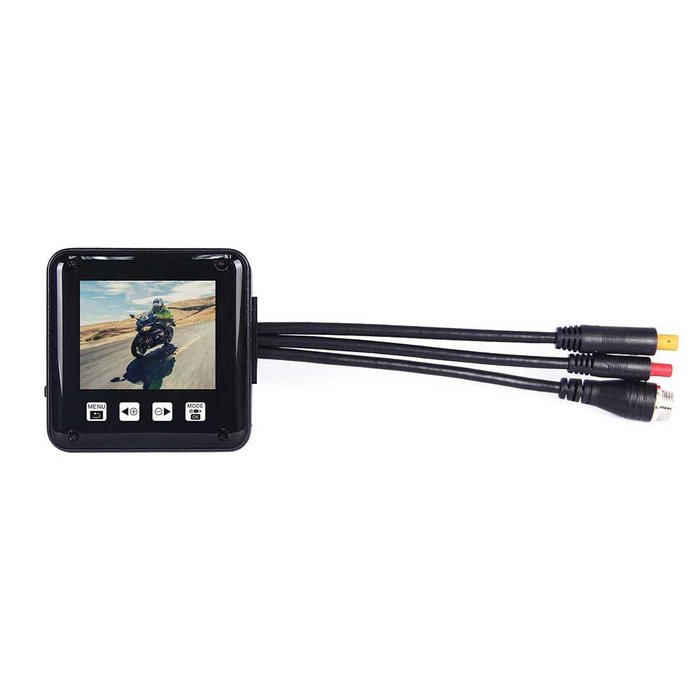 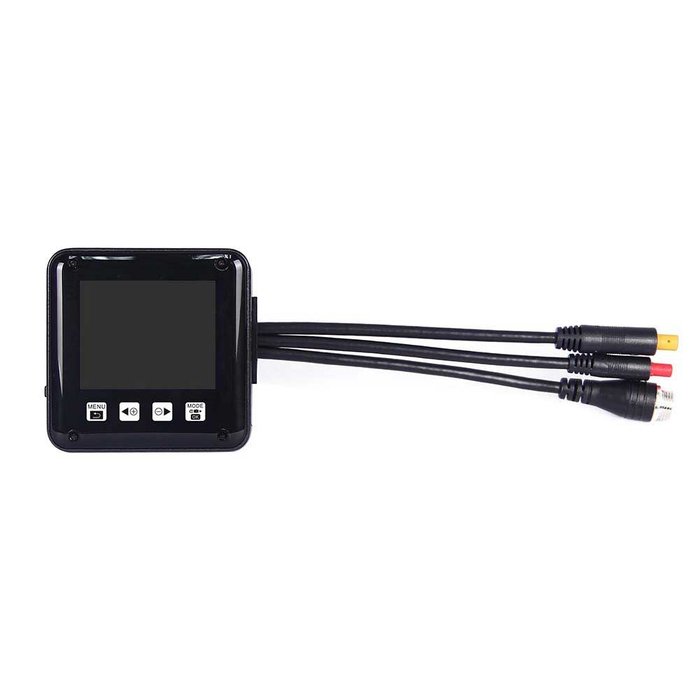 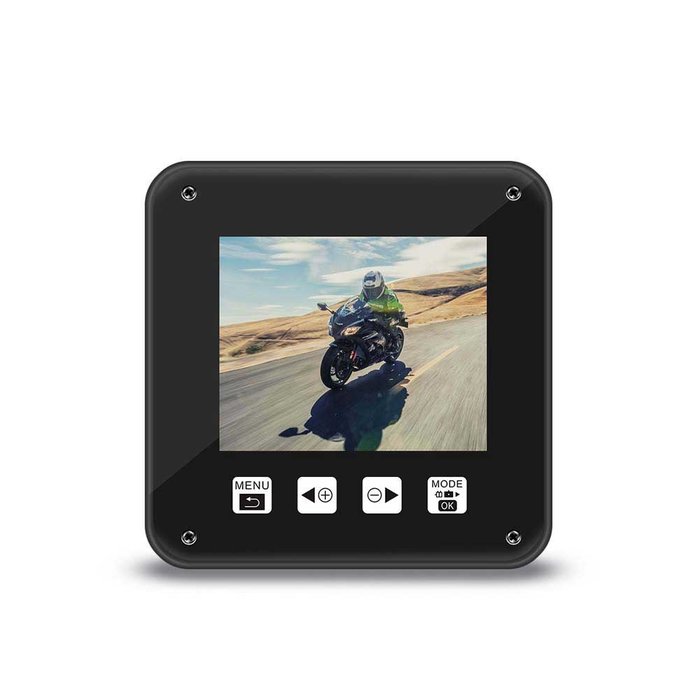 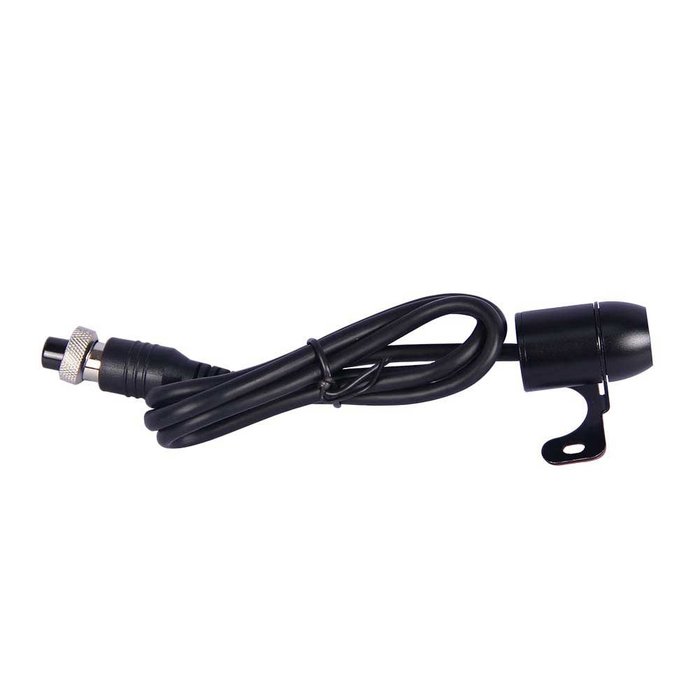 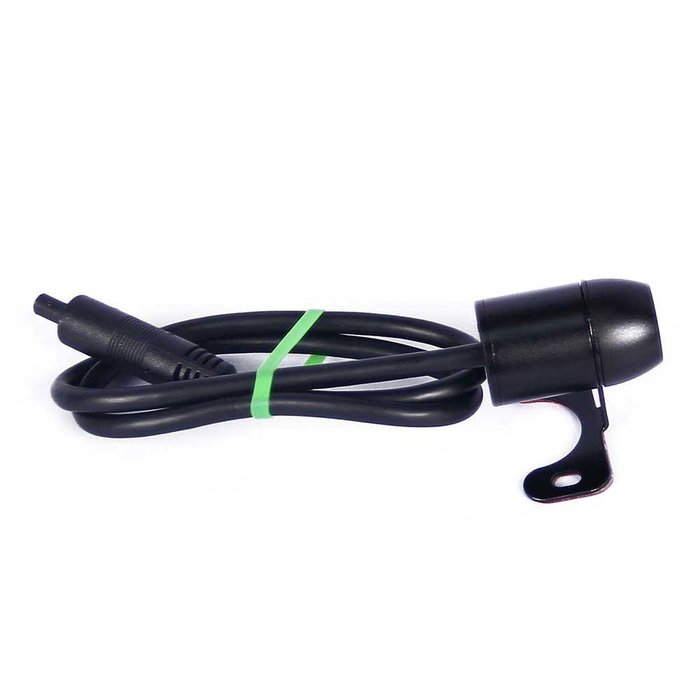 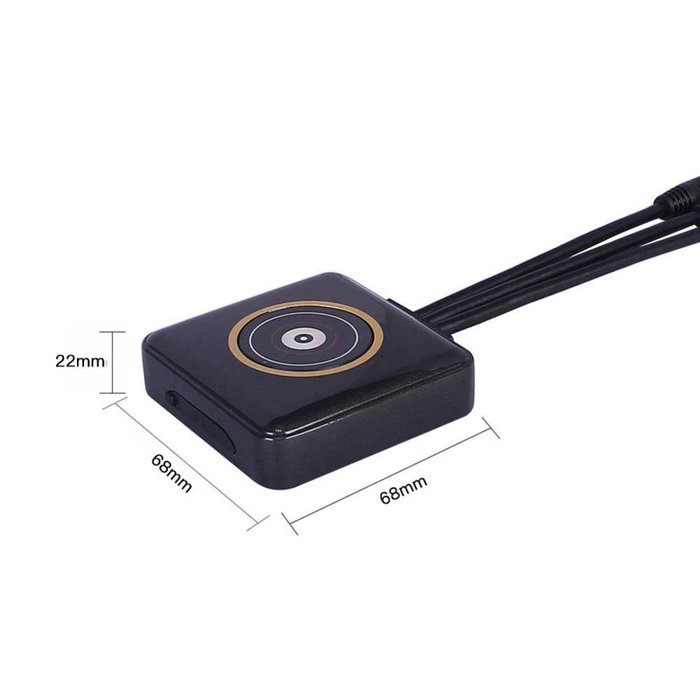 This Motocam P6F Wifi records in 1080p 30fps at the front and rear of your motorcycle. It uses the high quality Sony IMX323 sensor in both cameras, making the videos at night also very detailed and clear.

This Motocam P6F Wifi Wifi has built-in Wifi, enabling wireless video transferring between the camera and your iOS and Android phone or tablet. It uses a dedicated app which is available for free in the Appstore and Google Play store. QR codes for download links are included.

The Motocam P6F Wifi comes with an easy to mount and use S.O.S. button. The button is connected to the module and placed on an easy to reach place like the steering wheel. One press on the button saves the current video as emergency file that cannot be erased.

P6F Wifi is a motorcycle dashcam, that's why both cameras are IP67 water and dust proof. They are firmly built to prevent the lenses from damages by little stones or other debris.

This Motocam P6F Wifi comes with all the necessary materials and tools to install both cameras on your motorcycle. Both cameras are really compact and come with a 2.5 meter cable and mounting materials to make installation on any type of motorcycle possible.

The cameras of the Motocam P6F Wifi are connected to the separate waterproof module to which hardwire power cable is connected. The separate module is the 'computer' of the P6F Wifi. It processes the videos and also has the LCD screen and MicroSD card slot on it. It can be connected to your computer with the USB cable (included) to watch the videos you shot.

The compact but bright 2.0 inch LCD screen on this Motocam P6F Wifi lets you see the current and saved recordings and makes the menu easily accessible. IPS means it's visible from almost any angle.

The Motocam P6F Wifi has a 140˚ + 140˚ wide view ‘fish-eye’ lens to make sure a big area around the motorcycle is visible and captured.

The Motocam P6F Wifi has a super capacitor instead of a normal battery. Super capacitors are more durable and reliable than Li-ion batteries. They have a longer lifespan and perform better in very high or low temperatures. Note that capacitors only store power for a very short time, meaning that the camera will immediately turn off when the power it turned off and cannot be used without a power source.

The P6F features an optional GPS function. Connect the GPS receiver to the dashcam to track the current coordinates of each video and the current speed. The locations can be viewed later with the Motocam software and the speed is displayed at the bottom of the recordings.

The built-in G-sensor in this Motocam P6F Wifi registers when you have an accident and in that case saves the current file in a special emergency folder on the SD card. Files in this folder cannot be erased by the loop recording.

This Motocam P6F Wifi has a built-in microphone. The microphone can be muted in the menu.

One of the better motorcycle dashcams available. Great video quality and menu is easily accessible. Installation takes some work but when it's installed it's a perfect dashcam

I have this dascam already a few weeks and was able to try out all about all functions. Am 100% satisfied with all the possibilities that the dascam. The transfer of the images on my smartphone is not a problem over Wi-Fi. The cables I can well rid of my BMW R1200RT LC cables that thou shall walk. The waterproof display is good to put on my dasbord. In short, a product that is more than money's worth.

I installed the dascam today and it works perfectly, both front and rear with a magnificent view. For me a must for the moto.

Longer review I write later. Top camera with good picture, and super-user. Images even in the dark very clear and easy to operate WiFi. Please also thick with the service of Dashcamdeal who were always ready for (all my) questions.

All solidly built dashcam (heavy) with good image quality. Completely unobtrusive installed on my 900 GT and no further worries.

The camera unit and feel solid. It is a question of finding a proper mounting location on the engine. Aluminum strips I made brackets so I could attach the rear camera next to my license plate and the front camera to my TomTom brackets.    The thick cables take quite some space under the seat, but fits.    The instructions included are some sketchy in terms of information.    Some will also be a challenge Following wiring on the ignition.    But if it is installed on it, then it works great.    Beautiful product.