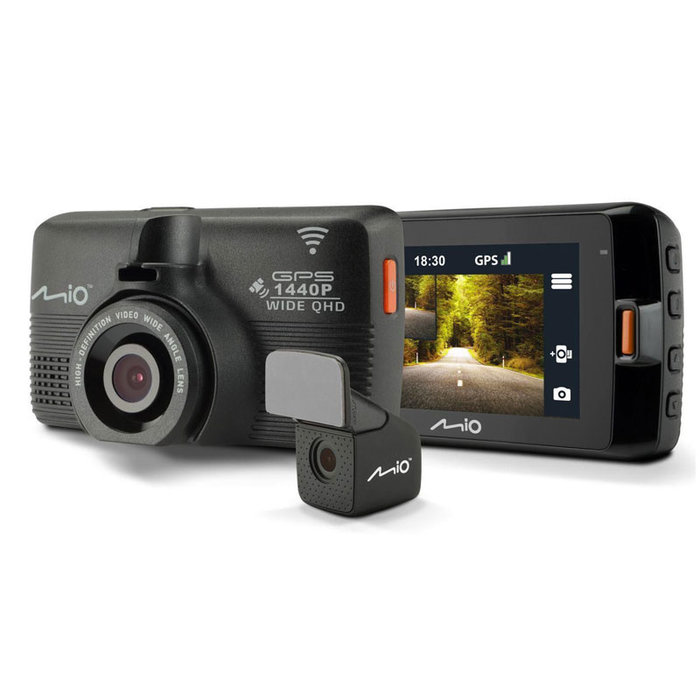 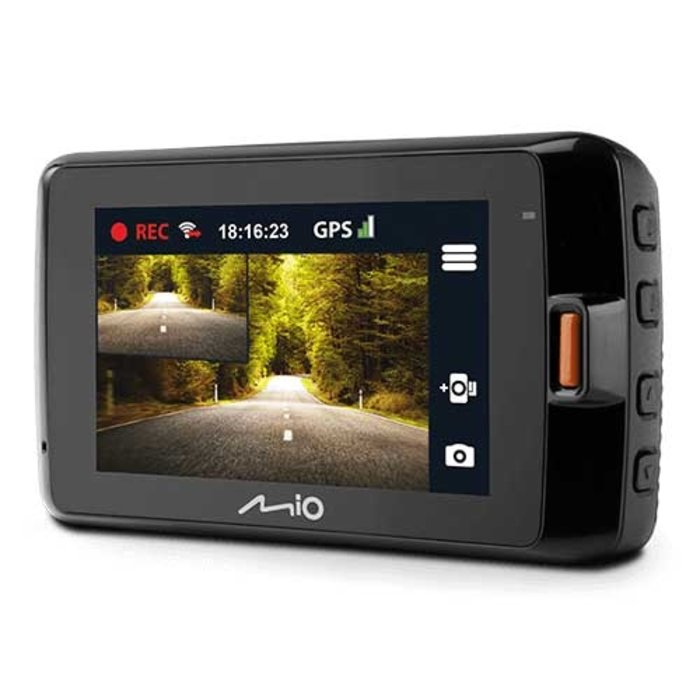 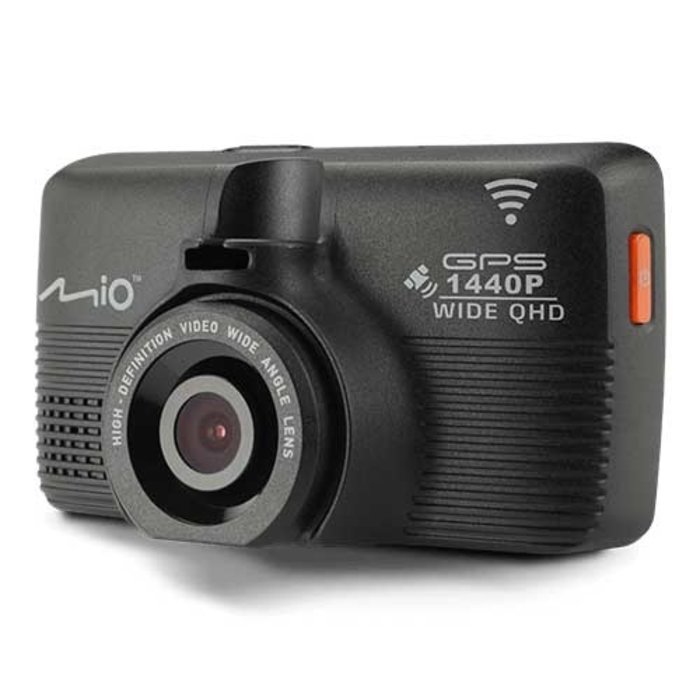 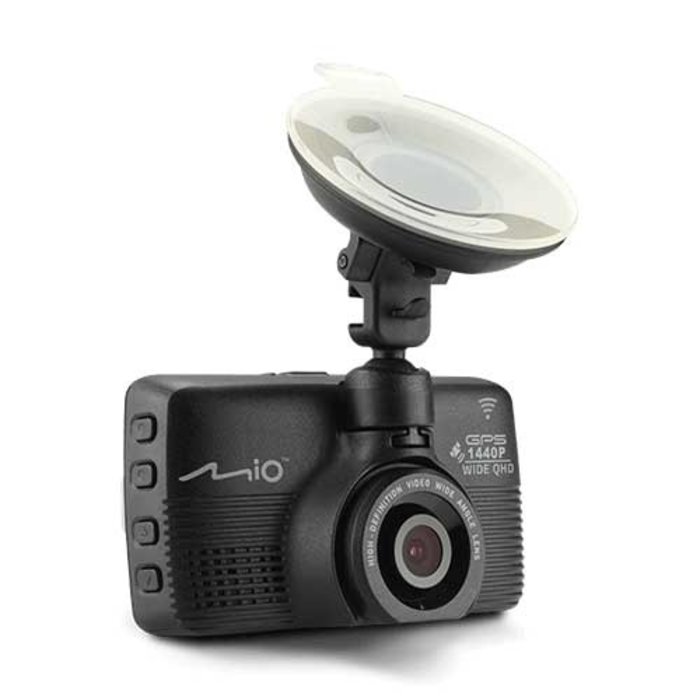 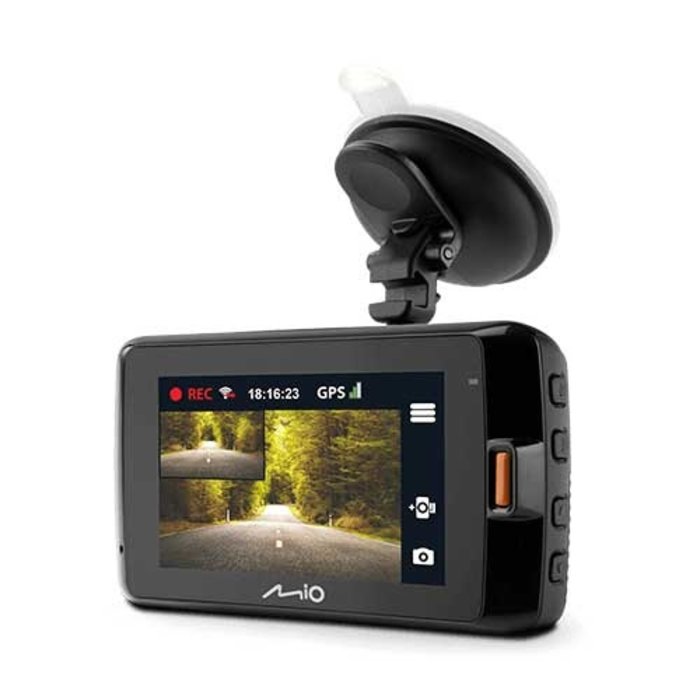 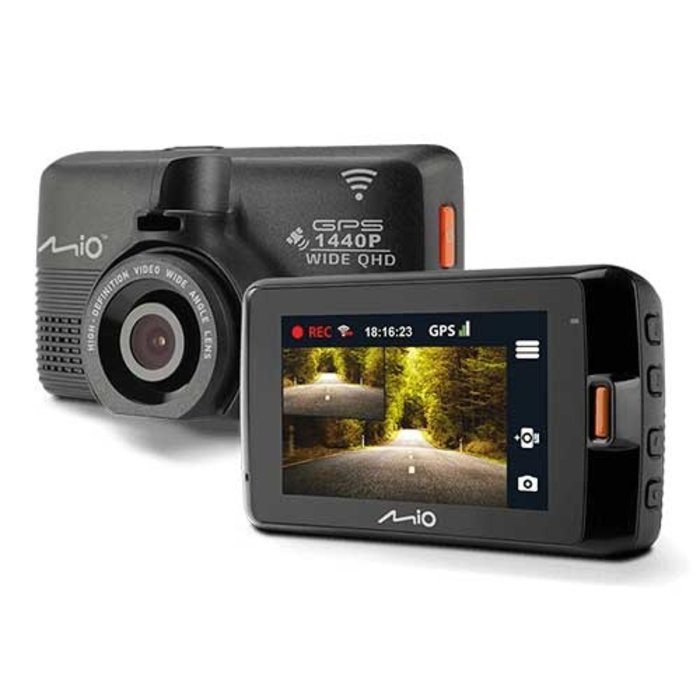 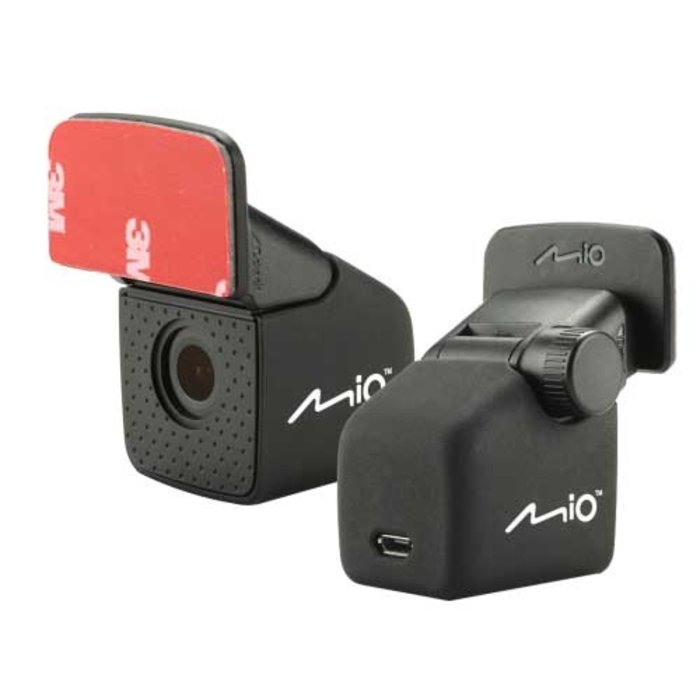 This Mio MiVue 752 QHD Wifi Dual records super sharp QuadHD videos in 1440p 30fps. It is equipped with a powerful 4.0MP sensor and AIT8428Q chip for optimal performance, also at night. The resolution can also be set lower at 1080p 60fps or 30fps and 720p.

Mio MiVue 752 QHD Wifi Dual is equipped with ADAS: Advanced Driver Assistant System. This system helps keep an eye on the road and warns the driver in critical situations. The ADAS system consists of four options that can be activated separately:

Note: Above systems work best in light and clear environments and depend heavily on road conditions. LCWS and LDWS only work on +60km/h and on straight A-roads. For more information and options, check this Mio page.

Mio MiVue 752 QHD Wifi Dual comes with the great MiVue A20 rear camera. When installed, both cameras record simultaneously and the video files are stored separately on the same SD card. MiVue A20 rear camera also has great video quality using a Sony sensor and a 140˚ lens. It comes with an USB Y-cable and long 7 meter video cable to connect it to the MiVue 752 QHD Wifi Dual front camera.

This Mio 733 Wifi GPS has built-in Wifi, enabling wireless video transferring between the camera and your iOS and Android phone or tablet. The Mio Pro app is available for free in the Appstore and Google Play store.

Mio MiVue 752 QHD Wifi Dual has a built-in GPS receiver to show the current speed in the video and to save all coördinates of your location. Later, the videos can be shown together with the GPS location in Google Maps using Mio’s GPS player for Windows and Mac. Check this Mio page for downloads.

Mio dashcams have an ingenious parking mode system. When the parking mode is activated in the menu, the MiVue 752 QHD Wifi Dual will turn into parking mode automatically when the car is stationary for 5 minutes. It knows when the car is parked due to inactivity of the G-sensor. The MiVue 752 QHD Wifi Dual will turn into Motion detection, meaning it will start a short recording once a movement is detected. Alternatively, the Parking mode can also be manually activated pressing the ‘P’ button and de-activated pressing the 'Return' button.

Note: The MiVue 752 QHD Wifi Dual will also turn into parking mode on its internal battery power once the power is disconnected (when the car is turned off). However, since the internal battery is small, the MiVue 752 QHD Wifi Dual should be powered with the Mio MiVue Powerbox (see accessories) in order to provide power to the dashcam when the car is parked.

This MiVue 752 QHD Wifi Dual is placed on the windscreen with an easy to use suction mount. This mount makes it easy to use the dashcam in more than one vehicle.

The Mio MiVue 752 QHD Wifi Dual has a 140˚ wide view ‘fish-eye’ lens to make sure a big area around the car is visible and captured.

Mio MiVue 752 QHD Wifi Dual has a small 240mAh built-in battery for safety reasons. The battery makes sure that the current recording can be saved on the SD card in case of a current power loss.

Note that it’s not the purpose of the battery to use the camera without being connected to the power, the battery doesn’t have enough capacity. Every dashcam should therefore always be connected to a power source in order to function properly.

When powered by the cigarette power plug, the Mio MiVue 752 QHD Wifi Dual will start recording automatically when the car is turned on and will stop recording when the car is turned off. Note that this function will only work in cars that provide power trough the cigarette port when the ignition is on. When power is also provided when the ignition is off, the MiVue 752 QHD Wifi Dual will stay on and has to be turned on and off manually.

The built-in G-sensor in this Mio MiVue 752 QHD Wifi Dual registers when you have an accident and in that case saves the current file in a special emergency folder on the SD card. Files in this folder cannot be erased by the loop recording.

The Mio MiVue 752 QHD Wifi Dual has the option to make pictures. The picture mode can be accessed by longer pressing the Menu button and the pictures are stored on the SD card in a separate folder.

This Mio MiVue 752 QHD Wifi Dual has a built-in microphone. The microphone can be muted in the menu.

I have two issues with the dashcam, the signal from the rear camera is often away (cables are fixed so vibrations seem impossible to me) and the wifi does not work, have several (android) tried phones.

Quality. Extremely sharp retailer symbolic images both in daylight, AO night. Given the many features and extremely easy installation this dashcam can readily compete with the more expensive types, eg. The BlackVue 900 series.    Excellent customer service and reliable supplier.

Delivery within 24 hours. Outstanding service! Great dashcam, which produces extremely sharp images in any weather, day or night. Very easy to install and program. Kids can do the laundry. Extremely pleased with this acquisition.